Diary of a Budding Philanthropist

While that might give most parents a heart attack, that’s exactly what I did a few weekends ago. But I didn’t do it alone, it wasn’t my money, and my parents were quite proud.

In my last semester at Goizueta, I took Philanthropy Lab, a class made possible by a partnership between The Roberto C. Goizueta Business and Society Institute and The Philanthropy Lab (P-Lab). P-Lab is a program of the Once Upon Foundation, which aims to expand student interest and participation in philanthropy. Led by Tene Traylor, an advisor at the Kendeda Fund, and Brian Goebel, Managing Director of The Roberto C. Goizueta Business and Society Institute, the class explores the role and practice of philanthropy in fighting inequity.

Philanthropy Lab was one of my favorite courses at Goizueta in no small part because of its uniqueness. Instead of learning how to make money, we learned how to give it away. The course brought together BBAs and MBAs to learn about best practices in philanthropy while learning about the inequities facing Atlanta. In the process, we had the chance to speak to nonprofit leaders about their organizations and visions of change. But the best part of the course was allocating $55,000 to ten Atlanta area organizations, tangibly helping them advance their visions of change. 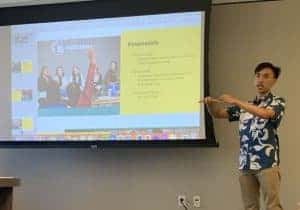 Ari and I making our day 2 presentation.

In June, Ari Farchi 19Ox 21 BBA and I were elected by our class to represent Emory at the annual Philanthropy Lab’s Ambassadors Conference, in Dallas, Texas. Fifteen schools from across the country, each representing an organization they funded in their class, were split into three groups to grant one of the organizations with $50,000. Unlike the class, we only had a weekend to learn about the organizations and award the grants.

Different schools house their Philanthropy Labs in different departments, which resulted in dramatically different types of organizations being brought to the conference. For example, the University of Washington houses their P-Lab in their international relations school, so they advocated for a large and well-established organization that works abroad. Whereas the P-Lab at the University of Wisconsin is in their Civil Society and Community Studies school, and they were advocating for a younger, smaller, hyper-local nonprofit.

Ari and I chose to represent Hope for Youth (HYPE), an organization that builds racial, gender, and economic equity in the tech industry by running coding camps, speaker summits, and after school programs with specific focus on helping girls of color in Metro Atlanta. We picked HYPE because a grant would catalyze its expansion beyond Greater Atlanta. Going into the conference, we learned that HYPE was the newest organization and the smallest in terms of budget in our group. This put HYPE at a disadvantage, because we assessed the organizations based on their track records and capacity for impact.

Having been to a few case competitions while I was at Goizueta, I was expecting the selection process to be extremely competitive. The conference had great schools, a monetary prize, and deck-making — three indicators of a great case competition. But I couldn’t have been more wrong. Our five-school pool was incredibly collaborative. We established that the $50,000 grant would go to the organization in the best position to make the greatest difference for its constituency. This criteria drove our collaboration as we discussed each organization’s track record and capacity. Each organization was doing amazing work in their community, making it difficult to decide where the grant should go.

Over the course of two days, multiple presentations per group, calls with nonprofit leaders, and hours of discussions, we decided to fund Her Future Coalition, a group in Nepal and India devoted to breaking the cycles of poverty and exploitation for survivors of gender violence and girls at high-risk girls by providing education, shelter, and job training. After the conference, to our surprise, each organization that was not awarded a $50,000 grant received a $1000 gift to compensate them for their participation throughout the conference.

The Ambassadors Conference will be one of the more memorable weekends of my life because of how much I learned and the people that I met. 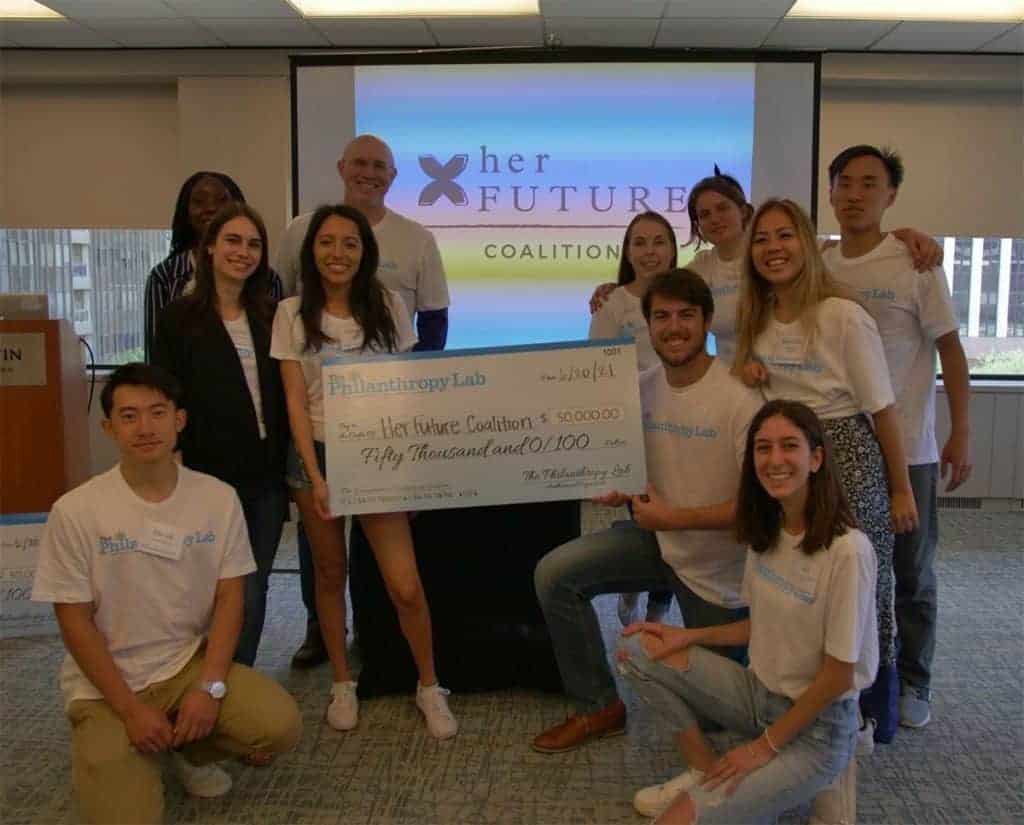 The check presentation to Her Future Coalition

Between the course and the conference, Philanthropy Lab has opened my eyes to the art and science of philanthropy as well as the power it has to change people’s lives. Perhaps my biggest takeaway from the experience is that it’s never too early to give time or money to causes you care about. While it may be tempting to focus on your career in the first few years of undergrad (still weird to say) to build earnings potential down the road, I think it is important to pursue causes that you care about because we can make a difference now.

As a recent graduate of Goizueta’s BBA program, Ian is interested in the ways that business can help bring about systemic change. During his time at Emory, Ian interned with the Southern Environmental Law Center and Deloitte. He is currently teaching Economics and U.S. History at Benjamin Banneker High School in College Park, Georgia, through Teach for America.