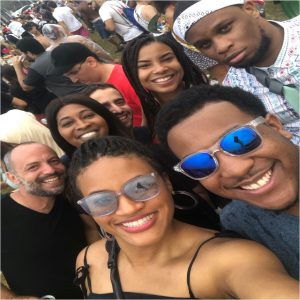 As the day for MSMs approached, tensions grew high. “Would we still be able to go to South Korea or would the trip be canceled?” I wondered. The coronavirus was already spreading at an alarming rate through Asia and threatened our prospect of exploring business and culture in an Asian country. Given that I spent a semester in China while in college, I was really looking forward to immersing myself in another Asian country’s culture and business practices. It soon became clear that it would be too dangerous to travel to South Korea, and the trip was unfortunately canceled. Determined to have the “business school travel” experience, I worked with the full-time program office to get transferred to the Brazil trip, and thankfully, I succeeded!

Our first stop in Brazil was Sao Paulo. Sao Paulo is very populous and busy, and is the financial center of Brazil. While there, we visited a number of companies including Cummins, P&G Brazil, and the U.S. Embassy. All the company visits were exciting and meaningful learning experiences. At P&G, we met an executive who spoke to us about how difficult it can be managing multiple brands across different geographies. It was insightful to hear about how the company’s many locations and products informed its overall business strategy. At Cummins, I saw how important it is for company culture/values to align with overall business strategy, especially at a manufacturing firm where safety should be of the utmost importance. Those visits really illuminated the business cases that I had read during my Core semester in marketing and in leading organizations and strategy classes. 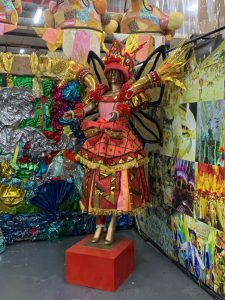 A Carnival costume produced by the students of the samba school

Aside from the company visits, I spent my days roaming the streets near the InterContinental on Paulista Avenue, shopping, and eating any Brazilian treat I could find. My favorite was the brigadeiro. I worked in NYC before business school, and one of my colleagues was Brazilian. She introduced me to that heavenly, moist, chocolatey treat for the first time in 2016, and my life hasn’t been the same since! I think I had a brigadeiro every day. They even have brigadeiro popsicles, and those are to die for!

Brigadeiros aside, I think the highlight for all of us in Sao Paulo was immersing ourselves in Brazil’s rich, vibrant culture via a Carnival party that we attended. It was a spirited event, with people adorned in colorful costumes, glitter, and confetti. Amid the music, alcohol, and gyrating, there was a sense of freedom, love, and acceptance. 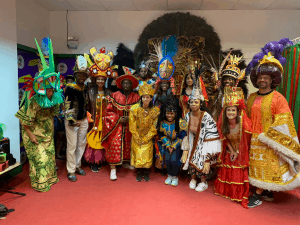 Full-time ’20 and ’21, and one-year ’21 students with Professor Jan Barton (right corner) after touring a samba school in Rio de Janeiro

After about a week in Sao Paulo, we traveled to Rio, where I found out that Carnival is much more than a mere celebration to many Brazilians. Carnival is recognized in Jamaica as well, but Carnival is celebrated in a more profound and intricate way in Brazil. Brazilian Carnival is a melting pot of European (Portuguese) influences and African music, dance, and beats. The Portuguese colonizers brought the festival to the country in the 1600s and celebrated privately and lavishly in their own homes. But over time, the Afro-Brazilians started their own festivals with African-inspired dances, music, and costumes that mocked the colonizers. In essence, it was a segregated event.

But then in the 20th century, the people took the celebration out onto the streets and it became more inclusive, fusing aspects of both cultures.

The Afro-Brazilians introduced samba and soon after, the first samba schools were created in Rio de Janeiro. There are a number of samba schools today, and they all create extravagant floats and dance routines to compete in the annual Carnival competition. We got the opportunity to visit one of Rio’s most popular samba schools, and even learned a few dance moves. 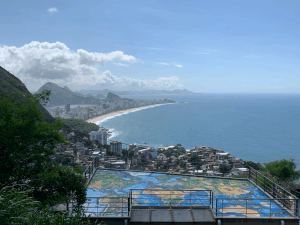 View from a building in Vidigal

Another highlight of our Rio trip was visiting Vidigal, a poor Brazilian community. Though living with meager resources, the people there were welcoming and obviously had a rich, supportive culture. The whole trip underscored the creativity and resilience of Brazilians, and the importance of cohesion in our communities.

Racquel Waite, originally from Jamaica, came to America 10 years ago to attend Colgate University in upstate New York. Racquel was an M&A equity analyst in New York City before attending Goizueta Business School. She interned at Liberty Mutual in the summer of 2020 and is going into her second year at Goizueta.